Another home re-arranged fixture for the Yachtsmen as Andover Town visited the Island looking for  a seventh consecutive League victory that sees them in 5th place.

It was plain to see from the start why the visitors had a 100% start to their league campaign as they dominated the game forcing two early corners. John McKie then ran at their defence before firing in a low shot that keeper Kieran McHardy saved well. Pressure finally told as Andover took the lead in the 22nd minute when a low cross from the Cowes right found its way to the back post where REECE RUSHER got enough of a touch to the ball to roll it past Ed Hatt and into the goal. But the lead was short lived as Jimmy Wykes sped into the Andover box only to be brought down and win his side a penalty, JOHN McKIE stepped up to send their keeper the wrong way and equalise for the Islanders.

Experienced forward Zach Glasspool should have restored the visitors lead when first in the 27th minute his shot was pushed away by Ed Hatt then in the 33rd minute an even better chance. Ed Hatt and Liam Gilbert challenged for the ball which ran loose to the Andover forward, but he chipped the ball over the bar from 20 yards. However he made up for those misses in the 38th minute when a superb cross from Mike Gosney in between defenders and keeper and ZACH GLASSPOOL headed the ball into the net from six yards. This began a seven minute period which Andover showed their class as by half time they were 4 – 1 ahead. Five minutes from the break another cross from the left found ZACH GLASSPOOL who turned and fired home from ten yards before seconds the half time whistle the impressive MIKE GOSNEY unleashed a shot from 30 plus yards that flew into the top left corner of Ed Hatt’s goal.

Steve Hunt made a change at half time, Harry Dye replacing Jordon Stacey in centre midfield that would surely beef up that area of the pitch. The change paid off immediately as Tom Dye’s 48th minute free kick from near the touchline in front of the changing rooms saw Harry Dye fouled in their box for which both Liam Hubbard and Joe Chamberlain received yellow cards for arguing. JOHN McKIE again stepped up to once again send Kieran McHardy the wrong way and reduce the arrears.

Minutes later and another Tom Dye free kick from the right picked out Harry Dye who sent a header towards the top right corner, but somehow a defender managed to head off the line for a corner from which Jack Broomfield headed over. Cowes piled on the pressure as Andover looked vulnerable, and in the 63rd minute yet another Tom Dye free kick caused problems, Harry Dye’s header this time pushed away for a corner, from which Max Draper just failed to divert the ball into the goal. Darren Williams replaced Jack Broomfield then Andover took Luke Dempsey off(before he got sent off) bringing Jason Silver on. Zach Glasspool then earned himself a yellow card for speaking out of turn. The points were settled in the 85th minute when the Cowes defence allowed ZACH GLASSPOOL too much time and space to fire home a fifth goal for the visitors.  A 90th minute free kick by Conor White was headed back across the goal where MAX DRAPER volleyed home from six yards for his first of the season. Still one final chance when Conor White’s corner from in front of the clubhouse hit Harry Dye at the far post but went the wrong side of the goalpost as far as Cowes were concerned.

A brilliant result for the Reserves as they beat Ryde Saints 5 – 2 away from home with Stuart McCarthy netting a hat trick and goals from Ben Holdsworth and Callum Watkins. 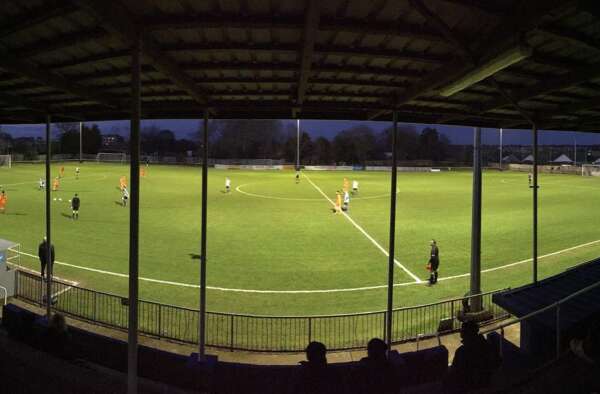