Cowes Sports reward for defeating Devizes Town in the previous Round was another home tie, this time against Southern Combination Premier Division side Pagham who had had a good start to the season lying in 6th place in their league with tghree wins, three draws and just one defeat from their first seven games. On the contary the home side still remained rooted to the bottom of the Wessex Premier wothout a point so far from their five matches. So a tough game was in prospect for the Island side. Aaron Burford was suspended from the game following his red card the previous weekend, but Conor White and John McKie were named on the bench after returning from injury.

Cowes started off brightly with an early Aarun Ince run down the left, but his cross was overhit. The visitors nearly took the lead on 8 minutes when Jacob Heryet saw his cross from the left touched goalwards by Jared Rance, but Cowes keeper Ed Hatt managed to block the effort with his feet. However the visitors did go in front a minute later when an attack down the Cowes right saw the ball rolled back to the right edge of the area where JOE BENNETT curl a superb effort over Ed Hatt into the left of the Cowes goal. Worse was to follow for the home side as Pagham doubled their lead on the quarter of an hour when a free kick from about 4 yards outside the left edge of the area in towards the near post found the head of TOM ATKINSON who used the pace on the ball to head past Ed Hatt. Cowes tried to respond to the setback but were lacking the final ball so Connor Kelly, in the visditors goal was having an easy afternoon. Pagham’s Jared Rance then was shown a yellow card for a challenge on left back Scott McFarlane. Ten minutes before the break a third goal was added by the Sussex side when Cowes were caught shrt handed by a quick break. Ed Hatt made a great save near the edge of his area but could not prevent SAM CONNOLLY from netting at his second attempt. So a poor first half showing from the Yachtsmen left them with a mountain to climb in the second half.

in the first minutye of the second half Pagham broke down the Cowes left and a cross along the six yard line left Joe Bennett with what seemed an easy chance but he only managed to balloon the ball over the Cowes crossbar. Finley Phillips tried his luck from nearly 30 yardsa but his effort was straight at Connor Kelly in their goal. Ed Hatt then produced another fine one handed save to deny Sam Connelly a second goal of the game for himself. In the 54th minute James Wykes was put through on goal and was seemingly brought down just inside the pagham box but no penalty was given as the Referee Stephen Jansen ruled that the defender had played the ball. Aidan Radford reoplaced Aarun Ince in the 56th minute before James Wykes again caused the visitors problems with a mazsey run before cutting inside and sending as left footed effort inches wide of the right hand post. Playing with more intent in the second half Cowes again went close ijn the 61st minute when a Finley Phillips corner from the left found the head of skipper Callum Chase who saw their keeper make a good block. The Yachtsmen found a way back into the tie on 63 minutes when a long clearance found JAMES WYKES who ran towards goal before smashing the ball into the roof of the net. Jared Wetherick came off in the 68th minute with Lewis Wright coming into the fray. Controversey  in the 69yth minute when Paghams left back, Jack Barnes elbowed James Wykes in the head near the half way line, but after consulting his Assistant only a yellow card was shown to the left back. George Holmes was sent on in place of Alex Wright with fifteen minutes to go but it was Pagham who sealed the tie with a fourth goal as Ed Hatt again produced a good save to deny jared Rance but substitute GRANT RADMORE slotted home the rebound to send the Sussex side throught o the next round. late on Finley Phillips sent a shot over the bar before six minutes into injury time a powerful Lewis Wright effort from 30 yards was pushed over the bar by Connor Kelly as the Yachtsmen bowed out of the competition. So the Wembley dreams are over for another year. 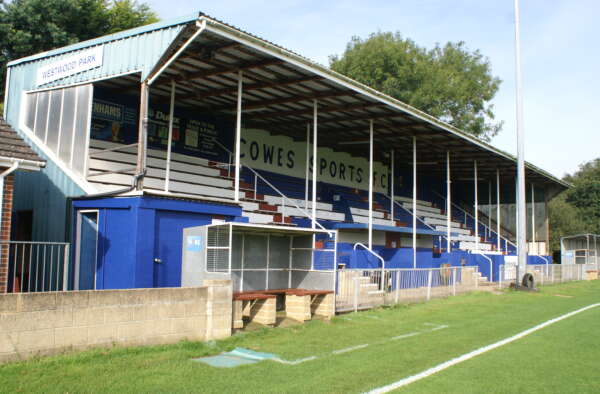