Pre Season League favourites AFC Portchester were the latest team to visit Westwood Park for this League encounter, though the previous games the sides had had very differing results. The Islanders came into the game with a huge confidence boost of a 8 – 1 thumping of Portland United whilst the Pompey side had lost to early pace setters Lymington Town 2 – 0, so an interesting game was in prospect. For the first time in ages Cowes named the exact same squad as their previous game(there is the challenge for Toby Collard to find out the last time that happened). The Portsmouth based side made seven changes from the squad that had lost to Lymington.

Alively start to the match saw the home side playing with confidence, in just the 7th minute Scott McFarlane pinched the ball in midfield drove into the peanlty area but lifted his shot over the Portchester crossbar before, a minute later Aaron Burford saw his shot from distance bend wide of the goal as Cowes showed there intent. Portchesters first chances of the game saw former Sholing striker Lee Wort have three attempts at goal, Cowes number one, Ed Hatt blocked the first two before with feet or hands before the third attempt went wide of the left hand upright. Another chance for the Yachtsmen saw Scott McFarlane cut in from the right before sending his effort into the left hand side netting. The Tangerines Toby Adekunle then done well to hold off the challenge of Yachtsmen Jimmy Mumford but could only push his shot past the right hand post of the Cowes goal. A really entertaining game continued  as Harvey Clark sent a shot straight at Ed Hatt before skipper Robert Evans saw his low shot cannon off the right post across the goal where Lee Wort should have netted, he missed the target although had he scored it would have been chaled off as he was in an offside position. In first half injury time Ed Hatt pushed away a Toby Adekunle free kick to keep the score goalless at the break.

The deadlock was broken just two minutes into the second period when right back Conor White picked the ball up just inside his own half and drove forward into space before playing in JEZ CONWAY who was one on one with keeper Scott Cameron, the Cowes forward kept his nerve and calmly slotted the ball past the keeper into the net to send the majority of the 137 crowd wild with joy. Jimmy Mumford was then cautioned by Referee Calum McFarlane for a foul on the half way line before the nearside Assitant Referee, Andy Jones, pulled up with a calf injury. Following some treatment though he was unable to carry on  but thankfully Sean Phillips was in the crowd and volunteered his services for the remainder of the game. In the 63rd minute Aaron Burford became the second home player to be yellow carded. A minute later and Cowes nearly doubled their lead when a Jez Conway shot cannoned off the Portchester crossbar. The home side then made a couple of changes as Aaron Burford and Alex Wright were replaced by Finley Phillips and John McKie respectively whilst Portchester’s Lee Molyneaux was replaced by Scott Faulkner. On 72 minutes Portchester thought they had equalised when a short corner routine ended with a cross into the Cowes box  which was met by a towering header from Luke Dempsey  who thought he had scored, but a superb save from Ed Hatt pushed the ball away from goal to safety. John McKie then sent a cross into the Potchester box which saw James Wykes send a header wide of goal when maybe he should have done better. Conor White then saw yellow for time wasting. John McKie had a shot easily saved by Scott Cameron before play became a bit niggley. Aarun Ince came on for the hard working Jez Conway for the home side. Then James Wykes was cautioned sor a sliding tackle that appeared to be a little harsh. Portchester’s Craig Hardy then went in two footed on Lewis Wright near the halfway line which led to a bit of handbags from both sides. After speaking with his Assistants, the Referee showed only a yellow card to the Portchester center half(should have been Red for a disgusting challenge) and a yellow to John McKie, not known what for though. Also thought their keeper was lucky not to be carded as he flew in with hands raised.  At some point Lewis Wright also picked up a yellow card but not sure why whilst Toby Adekunle also was shown yellow for Portchester. A nail biting end to the game as Portchester piled forward in search of the equaliser, though Cowes shopuld have sealed the win when John McKie palyed in fellow substitute Aarun Ince who slid the ball past keeper Scott Cameron but also the wrong side of the right post. Two minutes into injury time James Wykes was put through his shot was pushed onto the crossbar byt he visiting keeper but the ball dropped nicely for JOHN MCKIE to tap home Cowes’ second of the evening. However there was still some 10 minutes left to play due to two lenghty stops on play for treatment. John McKie had a shot blocked in the 98th minute with Finley Phillips firing at the keeper from the rebound. In the 101st minute Lee Wort saw his effort well blocked by Ed Hatt but the Yachtsmen held out to claim a magnificent three points and make two wins in four days.

Many will say that this was probably the best all

round Team performance seen from a Cowes side for many years against one of the top sides in the Wessex League. Conor White was named as “The Country Corner” Man of the Match. 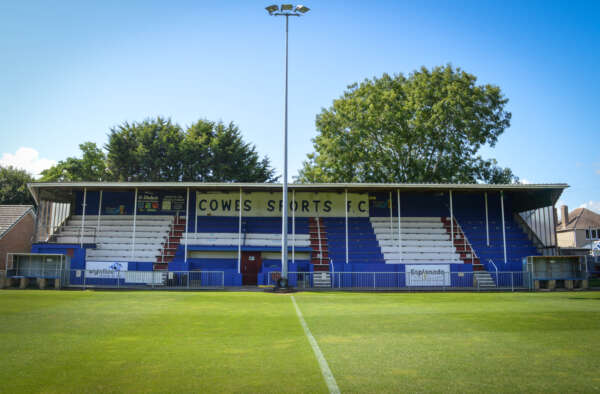