EXCITING DRAW AT HAMBLE CLUB IN LAST GAME BEFORE LOCKDOWN

So the Yachstmen’s final game before a month long break due to the latest Covid 19 related lockdown begins saw them make the trip across the Solent to Hamble Club who were on same number of points as Cowes but sat one place above the Island side because of a slightly better goal difference. In order to allow the players the chance to get back to the Island on the 10pm sailing from Portsmouth, a 7:30pm kick off had been agreed by both clubs, however a late change of the Referee somehow meant that he did not know of this agreement so the gsme eventually started at around 7:40pm which consiquently meant that there would be no chance of catching the 10pm boat, with the next sailing being at midnight. With the management team still self isolating, Mark Randall was again in charge and made just one change with James Wykes starting and Finley Phillips dropping to the bench.

Quite a lively start to the game from both teams as the home side saw Will Gange through on goal as early as the 5th minute but Cowes’ number one, Ed Hatt made a great block to deny a goal before the same player fed Sam Wilson who also saw his effort blocked. Hamble’s Mitchell Byrne was cautinoed in the 6th minute for a foul on Jez Conway, then a minute later a pass from Conor White saw Jez Conway’s effort land on the top of the net. It was Cowes that opened the scoring in the 8th minute when Scott McFarlane, just outside the Hamble area to the right of goal, got the ball onto his left foot where his shot fortunately hit JAMES WYKES to divert the ball into the goal leaving the home keeper, Kasper Kowalczyk stranded. Hamble responded to the set back and onlt another fine block by Ed Hatt denied Nehniah McKinley-Burke from equalising. On 13 minutes a long defensive clearance from skipper Callum Chase saw Jez Conway and their keeper in a race to get the ball just outside the area, the keeper just won that race to clear the danger. Sam Wilson then sent a curling shot wide of the Cowes goal before James Wykes had the ball in the Hamble goal only to be flagged offside by the Assistant. In the 22nd minute a great interception by Alex Wright saw him play the ball into the path of Jez Conway but a great tackle from Joshua Batt prevented the Cowes forward from scoring. From the corner Aaron Burford headed wide of the Hamble goal before a home side corner flew across the face of the Cowes goal with no one in the right place to get a touch to send the ball into the goal. For the remainder of the first half nothing much happened as both defences nullified the opposing attacks so the Yachtsmen went into half time a goal to the good.

The start of the second half saw the home side with only ten players, Josh Batt not reappearing, but his replacement Jamie Cassels was not ready, luckily for Hamble an early break in play meant they were back to the full compliment within a minute. Just three minutes after coming onto the pitch Jamie Cassels was cautioned for a late tackle on Callum Chase. In the 53rd minute the Islanders brought on John McKie in place of the hard working Jez Conway before Ryan Wilkins was replaced by Rafa Ramos for the home team. John McKie then sent a 60th minute shot wide of the Hamble goal before Jamie Cassels did similar for Hamble. In the 63rd minute the home side found an equaliser when a free kick into the Cowes box was miskicked by Hamble’s Will Gange but it fell nicely for MITCHELL BYRNE to net from close range. Finley Phillips was sent on for Cowes in place of Scott McFarlane to try and liven things up for the visitors. Just seven minutes later a lovely through ball by Finley Phillips found JOHN McKIE one on one with their keeper and he calmlt clipped the ball over the advncing keeper into the net to restore the visitors lead. However that lead only lasted some four minutes as a needless free kick was given away by Alex Wright near the left touchline from which the ball was clipped into the Cowes six yard box where MITCHELL BYRNE sent a free header into the goal for his and Hamble’s second goal of the game. James Wykes was taken off with Aarun Ince coming into the fray before Mackenzie Gange was replaced by Ricky Bull.  A frantic finish to the game  in the last five minutes as both sides looked to take all three points. First John McKie ran at the home defence only to send his shot over the bar before Finley Phillips watched as his shot was saved low to the keepers right. In the 88th minute another John McKie effort was pushed over the bar by their keeper before in the 91st minute Cowes thought they had won the game when JOHN McKIE found space to shoot across the keeper into the bottom left of the home goal. Hamble though had other ideas as in the 93rd minute a cross to the edge of the Cowes box found home skipper MICHAEL BYRNE and he sent a curling shot into the left corner of Ed Hatt’s goal  and for the third time in the game bring his side back on level terms and mean that the points were shared.

A very entertaining game between two evenly matched sides that will not set the division alight but will give a lot of the more fancied teams a game and am sure they will,both cause a few upsets along the way.

So that is it for a month as the Covid lockdown comes inot force on Thursday November 5th until Wednessday December 2nd. Though whether football will start again on the 5th of December(Cowes are in theory away to Bournemouth) or whether the League will allow for a couple of weeks to prepare for the next game as a mini pre season will be needed. We will off course keep you all informed as a when we know via the various social media outlets. 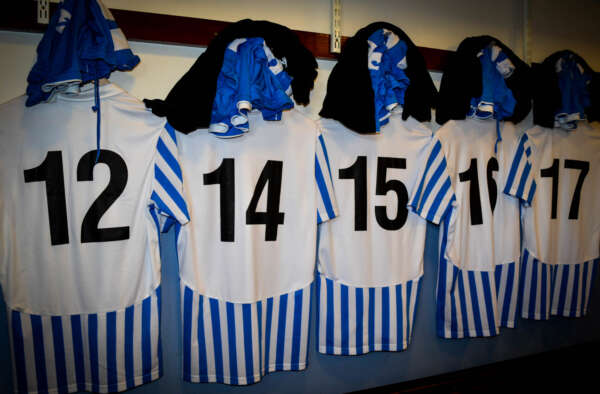